Another Successful Year at Loretta Lynn's for Kawasaki Team Green 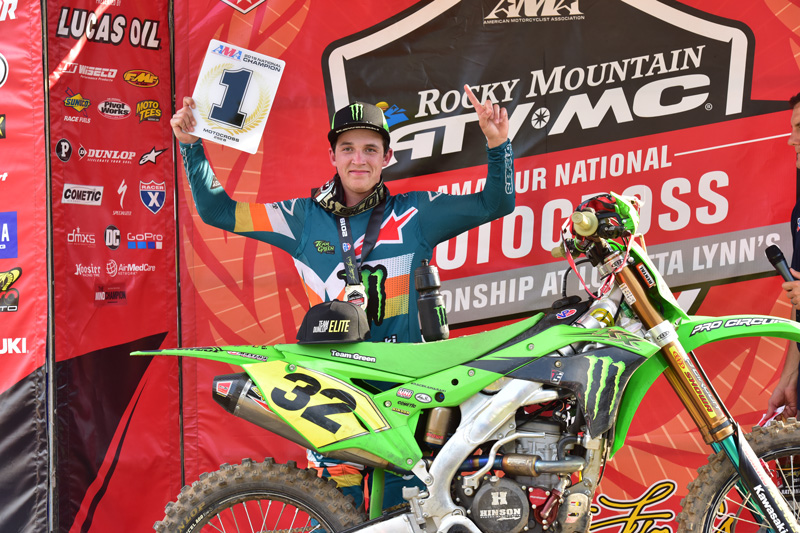 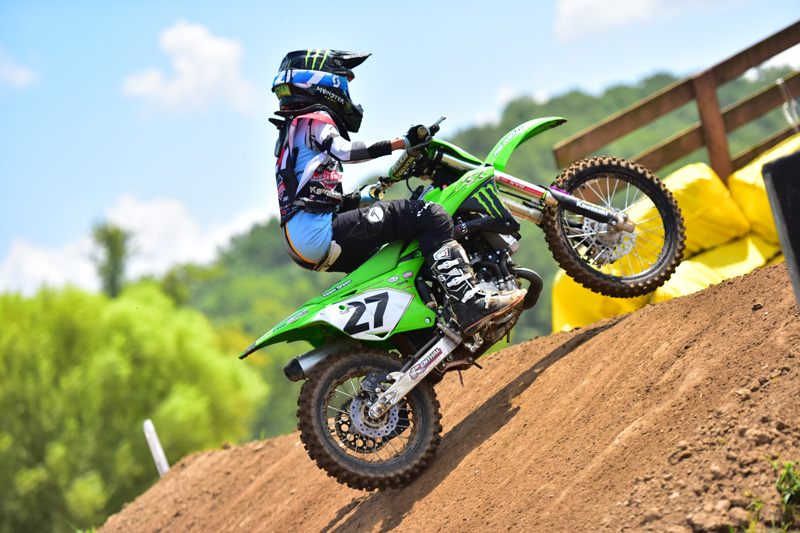 Ryder DiFrancesco donned the No. 1 on his KX™85 for Team Green in the Mini Sr. 1 class as reigning champion and No. 99 in Mini Sr. 2 class. In the last Mini Sr. 2 moto, DiFrancesco looked poised to grab the championship with his 2-1 moto scores, and rocketed out of the gate to the first corner grabbing the holeshot, but he fell in the ensuing corner. From last position, the California native scratched and clawed his way back to the front of the pack. At the half way point of the race, DiFrancesco had brought the crowd to their feet as he ran the fastest lap of the week in the Mini Sr. classes, four seconds faster than any rider. After moving into third place, a crash on the last lap ultimately dropped him to fifth where 2-1-5 moto scores placed him third overall in the championship standings. Coming into the final moto of the week after suffering some misfortune in the Mini Sr. 1 (12-14) class, DiFrancesco made a statement to his competitors by winning the final moto in dominant fashion.

Stilez Robertson led the charge for Monster Energy Team Green big bike riders aboard his KX™250, battling for wins and championships in both the 250 B and Schoolboy 2 (12-17) B/C divisions. Robertson set the tone early in the week by winning the first 250 B moto and made it known that he was one of the fastest at the ranch in 2019. His consistency throughout the week was what ultimately earned him the championship in the 250 B class with 1-2-2 scores, and 3-5-2 scores in the Schoolboy 2 class that were good enough for second place overall in the championship battle. 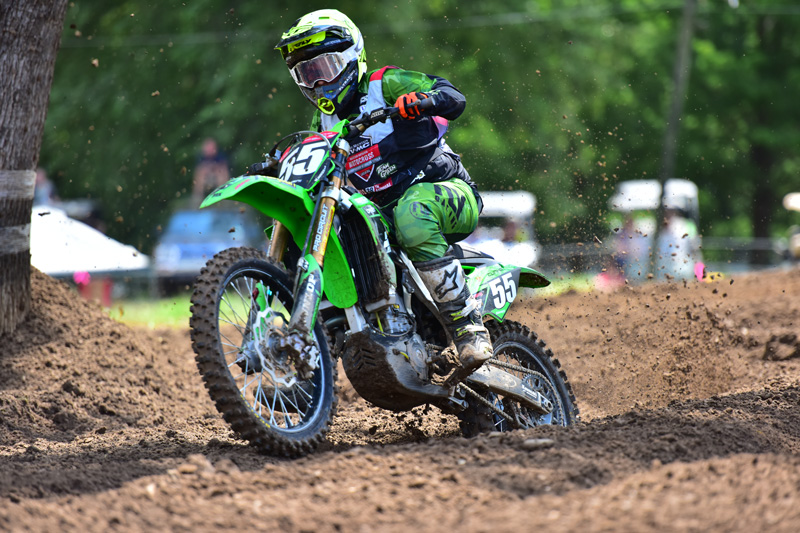 Just as he has done all year long at other major amateur nationals, the No. 55 green machine of Dylan Cunha won in dominant fashion throughout the week. In the 250 C class he was able to remain perfect the entire week by sweeping the class with 1-1-1 moto scores. In the 250 C Jr. (12-17) class, a bad crash in his second moto hindered his overall results but was still able to manage a 10th place overall finish in the class. 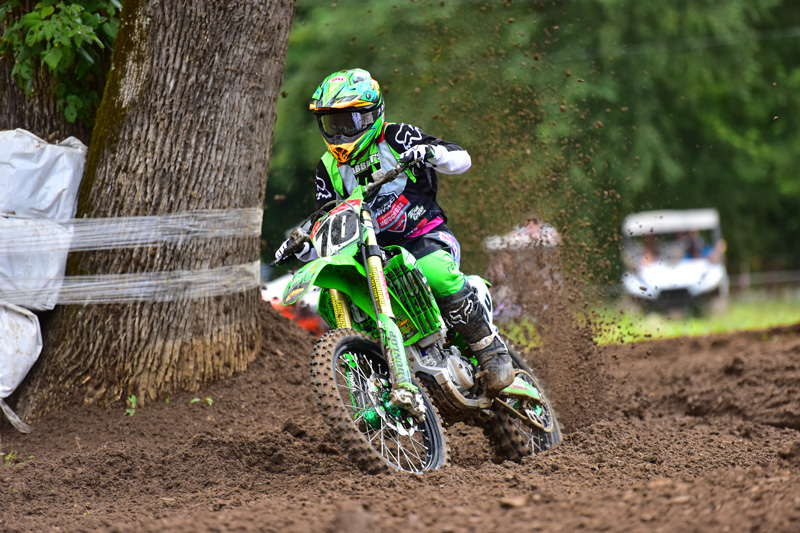 John Grewe would once again win the Masters 50+ championship for the fourth consecutive year. Grewe also placed his Babbitt’s Online Kawasaki KX™450 on the podium with a second overall in the Senior 40+ class with 2-2-2 scores, while fellow Team Green riders Gregory Pamart and Ryan Valade rounded out the top five behind Grewe. 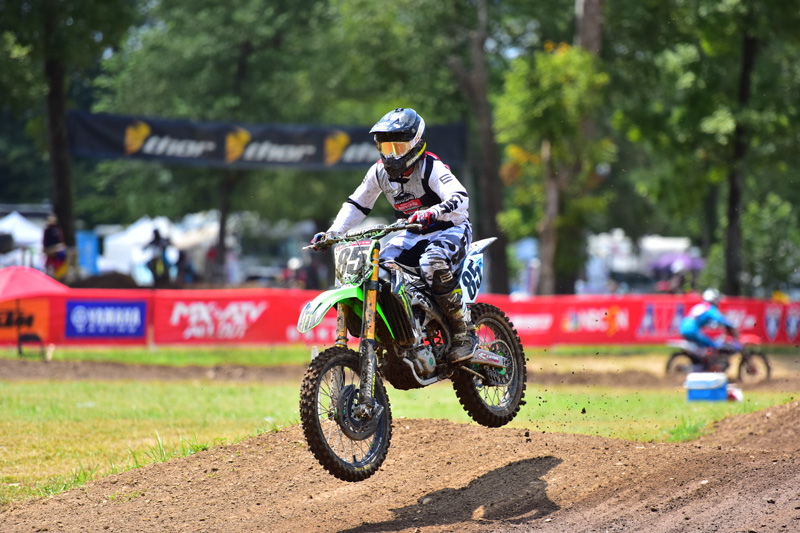 In the vet classes it was not only about Team Green’s Grewe who had success, in the Senior 45+ class there was a first time Loretta Lynn’s champion crowned by the name of John Bowlin aboard his KX™450. Bowlin sat with a 1-1 score heading into the final moto of the week and was put to the test as the Tennessee skies darkened and the rain began to engulf the track. Despite the conditions, Bowlin was bound and determined to capture his first ever championship and did just that by sweeping the Senior 45+ class with perfect scores. Fellow Team Green rider Don Boespflug joined Bowlin on the podium with 3-5-2 scores, earning a second place overall in the class.

Joining Grewe and Bowlin in the vet championships was Nicholas Hayes who captured the Vet 30+ championship with consistent riding throughout the week. But much like his competitors, he would be forced to overcome adversity. After finishing first and third in his first two motos, Hayes pulled into “Greenville” seeking the aid of the Kawasaki Trackside Support team. The team quickly got him and his machine back to race ready. Hayes went on to win the final moto and the championship, stating “none of this would have been possible without the help yesterday from Kawasaki Team Green’s Trackside support crew. I can’t thank those guys enough!” Fellow Team Green rider Taylor Painter joined in on the action with a third place overall finish in the Vet 30+ class. 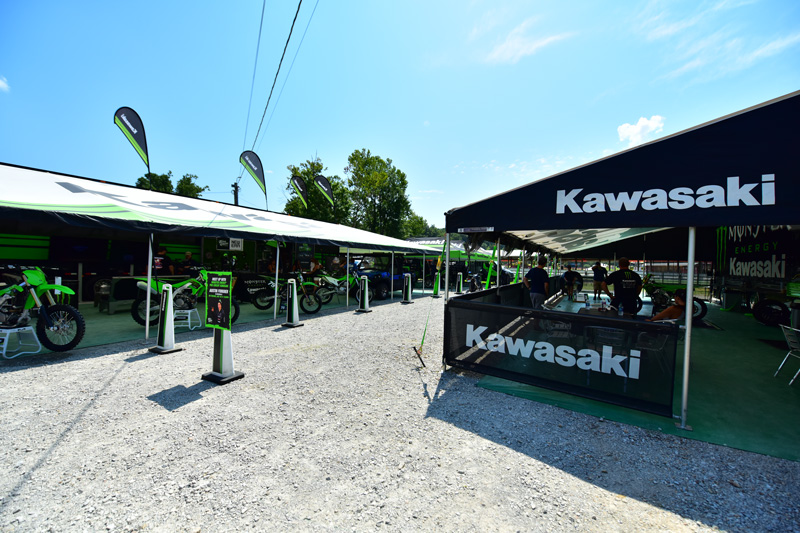 “It's always great coming to Loretta Lynn's,” said Team Green Manager, Ryan Holliday. “We enjoy catching up with so many of our Kawasaki racers and families from coast to coast. We strive to give them the best experience and support that our Team Green staff can provide. It was awesome to have some of our new lineup of 2020 KX™ and KLX® models out on display all week long for people to come check out.”

KAWASAKI CARES: Always wear a helmet, eye protection and proper apparel. Never ride under the influence of drugs or alcohol. Adhere to the maintenance schedule in your owner's manual. Professional rider shown on a closed course.This message was sent to you because you have expressed an interest in receiving email updates from Kawasaki or you are a current owner. You can unsubscribe or modify your email preferences at any time by clicking reply to this email.